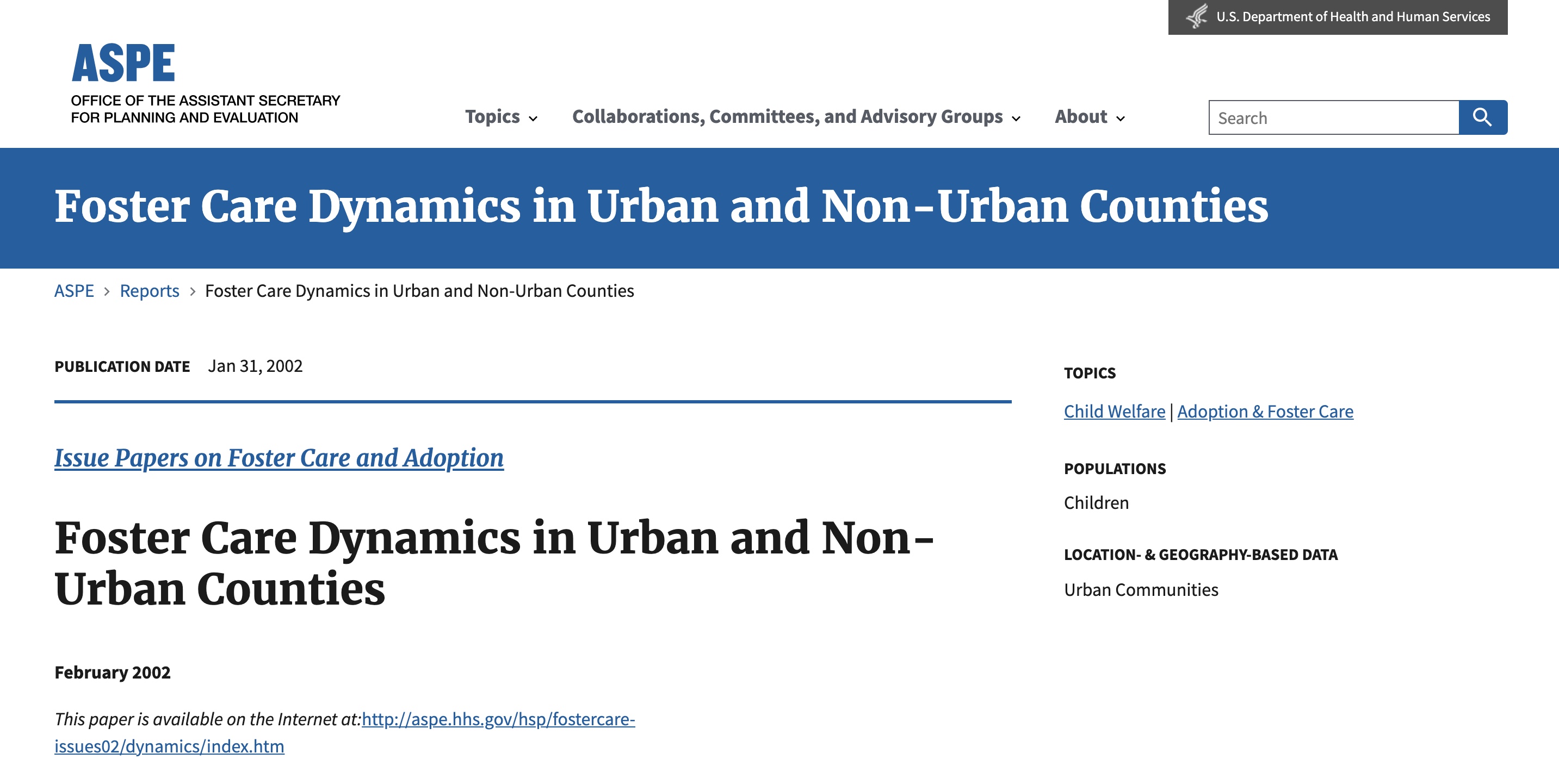 While viewing things at a statewide scale is standard in data reports and analysis, it forces us to assume things about a place. This study by the ASPE does things differently; they categorize counties within states by their level of urbanization: primary urban, secondary urban, and non-urban. The categories are divided as follows; primary urban areas have the largest child welfare systems in the state, secondary urban areas are all other urban counties, and non-urban areas are all other counties. This study finds new trends, creating an interesting analysis of the American foster care system. Using a more comprehensive scale such as the one used by the ASPE lets us see the problems that American foster youth face. This proves that looking at things differently lets us understand them better.

For background, the ASPE explores how the increase of children placed in foster care is widely considered to be an anomaly. Over the course of a decade (1990-1999), over 150,000 youth were placed in foster care, thousands more than previous decades. The statistics that are associated with a rise in foster youth rates actually went down in this time period; the crack cocaine epidemic—which resulted in many infants being placed in foster care—was subsiding, child poverty and maltreatment declined, and the government began funding family preservation programs. Despite these progressive services, the foster care population grew at a steady four percent annual increase.

Looking at things geographically lets us see what people need and what impacts people the most in certain areas. The ASPE establishes that social disorganization (economic and environmental issues) has a direct relationship with foster youth entrance rates. Higher social disorganization is expected in urban areas, thus these areas should expect more foster youth to enter their systems. Another benefit of small-scale analysis—looking at things with more detail— is that we can look at patterns created by factors such as race or income.

A similar idea discussed in the study is how large urban counties deal with a unique set of circumstances; insufficient resources, high population density, and overcrowding. This fact leads into the categories developed by the ASPE, since urban and non-urban counties face different issues. We can tell which trends are consistent when looking at foster youth in a certain state as a whole compared to “zooming into” its counties.

Isolating data allows us to make more accurate comparisons between the states, we can tell exactly why certain pieces of data exist and how they fit together. It reveals that most of the differences between states come from the primary urban areas, meaning that the primary urban county in state A faces a very different set of circumstances when compared to state B; secondary urban and non-urban data remains surprisingly consistent nationwide, thus state A and B’s secondary urban and non-urban areas are relatively similar. The data highlights the importance of environmental factors in the performance of foster care.

Rate of First Admission to Foster Care by Year and Urbanicity

The American foster care system is made of fifty individual systems that loosely work under the national government. To understand national trends and patterns, we must look at a more local scale; since states are not consistent within themselves, certain areas have more favorable characteristics. These factors must be brought to our attention for us to see what is happening. Looking at data with a magnifying glass lets us see what stays the same and what changes. In order to create a more equitable and effective system, we must look at this data and ask how did we get here?